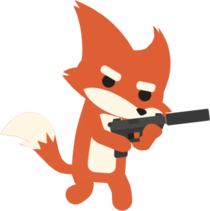 Guns are ranged weapons that require ammunition to fire. Most guns can be found all around the map, some are available only from the Mole crate, which includes:

There are 5 tiers of gun rarity. Each gun has its own range of rarities, displayed underneath their image above.

Legendary weapons are only found in Mole Crates.

Gun rarities directly affect the weapon's stats, and are not to be confused with weapon skin rarities.

While each gun has individual range, a bullet cannot travel further than 120 SAU, which is the equivalent of half a screen's width at any resolution. Beyond 120 SAU, theoretical range only affects its damage at higher distances. Gun damage shown on the wiki pages is "at barrel", or point blank range. The damage will drop off the further away the target is, following the formula: actual damage = (1 - (distance ÷ theoretical range)) * damage.

See the below diagram for a visual explanation. 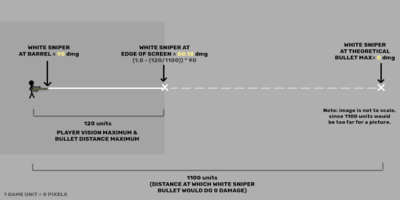