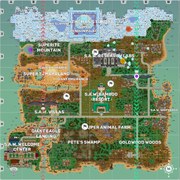 Drop points and flag distribution of two teams in S.A.W. vs Rebellion

The mode is a team deathmatch between two teams each counting 32 players where players are further split into squads. The goal of each team is to kill the players of opposing team and/or capture majority of the flags. Downed players receive passive movement boost while downed.

The map also features four flags situated between two lines of drop points which can be captured. When captured, a small zone around the flag is created which provides healing aura in which all allied players receive 4 health points per second unless the flag is inside of skunk gas. Additionally flag capturing players are immune to sliding on bananas thrown by the teammates.

After a team manages to capture majority of flags (3 or more), a timer starts counting one minute, if the opposite team doesn't capture enough flags in time, the team with majority of flags wins. During capturing, timer is paused until player either stops capturing or captures the flag. Bots are able to capture the flags.