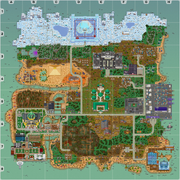 Super Animal World is a run-down, safari theme park and the primary location of Super Animal Royale. The island is composed mostly of woodland, but also features a desert, a swamp, a tundra, as well as many beaches. Many clusters of houses dot the landscape, suggesting the staff of the original park lived onsite as the island is otherwise surrounded by ocean. There are also several cargo dumps throughout the island, carrying an innumerable amount of goods.

Giant Eagle Landing is a subarea located in between of S.A.W. Welcome Center and S.A.W. Villas, somehow making an impression of a gathering spot secondary to that of S.A.W. Welcome Center. The area's theme seems to be centered about the Giant Eagle, to which the player drops from in the beginning of the match, and possibly, the Super Birds. It houses a store on the east that either plays Lady Cawcaw, Blue JayZ or Kelly Larkson's song whenever the player enters the stage. In the middle is a broken stage which spawns a lot of crates during the game. On top of it is an entertainment house called Giant Eagle Rides and at the left of the stage is a restaurant. There are also a couple of villas located in its western side. Cover in this area are moderate and involve also getting in and out of buildings. The items spawned in here make it a secondary choice of a spot worth dropping. Mole crates here appear infrequent and rarely.

Super Saharaland takes place within a desert setting with very open plains consisting of very little cover and a few run-down and abandoned building complexes. The south part of Saharaland consists of bridges connecting the desert with the rest of the S.A.W. map whilst heading north will eventually lead you to Superite Mountain. While there aren't many opportunities to find loot in most of the desert, the small sections consisting of buildings have reliable and dense loot spawns, making it an acceptable place to drop within. Saharaland is commonly placed within the Circle Of Life but sees to be a rarer endgame location once the Circle Of Life has shrunk to its final phases. Saharaland appears to be a previous place for accommodation to visitors of S.A.W but does appear to have not been in use for some time. There's a Pyramid which holding some secret and Super Skullcat Sphinx where The First Skullcat rests peacefully.

The Ranch is located in Super Saharaland, it's a place where Emus being taking care and breed. Rebellion Forces using this place to take over Emus to give advantage against S.A.W. Forces.

Superite Mountain is a mine located on the north western side of the map. Inside the mine, you can see superite, both mined and unmined, as well as what appears to be a Rebellion base. The prison is featured in an episode of SAR Tonight, in which the rebellion took hold of Donk Patrick and Howl Michaels and held them hostage.

An extremely large and open Tundra area that takes up a large chunk of the northern-most part of the map. This area is littered with small groups of houses, mountains and cargo containers. The Tundra has very similar properties to other parts of the map such as Goldwood Woods with a reasonable amount of cover provided by buildings, rocks and trees. But whilst it spans a large area, very little amounts of desirable loot spawns here. The Circle Of Life also doesn't often include the Tundra, making it a very undesirable area to drop within. The purpose of the Tundra within the park is unknown other than for accommodation. There's also frozen lake and Penguin Palace where you can find lots of good lots but also being attraction for another enemies, there's also Thomas' Workshop where Thomas lives and become a place for Super Animal Royale Tonight Season 7 by Donk Patrick and Howl Mitchells after escaping from Rebellion forces with the aid of Thomas himself. Rumors that Thomas own this tundra according by the name.

The Chinese themed resort is located in the middle of the map, south from Super Animal Farm and north from S.A.W. Research Labs. There's a golden statue of Super Animal which included in Chinese Zodiacs that will change every Chinese New Year. There's also Pandup Comedy stage where you can hear pre-recorded performance of Super Panda doing their jokes but ended up boring afterwards.

Located within the northern side of the map, the S.A.W. Research Labs is a core location of Super Animal World. S.A.W. Research Labs has a total of 7 entryways. Inside, the west, north and east buildings that make up for the main sections, marked by the numbers 1, 2 and 3 respectively. There are a total of 7 explosive barrels scattered inside the lab and the nearby surroundings. Building 1 has the layout of a prison: it contains a large amount of smaller cells. Building 2 has the layout of a messy office: the corridors and the fallen apparatus make up for its coexisting wide and narrow environment. Building 3 contains a lot of test subject chambers which form a narrow and complex layout. In the S.A.W. Research Labs, especially in building 1, the spawning points for resources are extremely dense, which allow players to be able to gather them in a short time. Close ranged weapons have the advantage in the indoor areas, while on the contrary, long ranged weapons have the advantage in the outdoor areas. Along with these main 3 buildings, located within the courtyard between the 3 core buildings are 2 small (and also messy) office buildings; although these offices only often have low quality and sparse loot spawns.

A small and dense section of the eastern-most part of the map, the shipyards consist of several cargo containers with lots of cover, and its density makes for several close quarters encounters as well as some hard navigation. Whilst not a common place for the Circle Of Life to spawn the good quality loot spawn rates and density make it a good place to drop and loot in early game but quite hectic. Since the Shipyards are along the east beaches, coconuts can easily be found providing for easy health or challenge progress. The purpose of the Shipyards appears to be an area for S.A.W. to handle cargo.

The countryside of the island, the Super Animal Farm is located in the center-most and bottom of the island, between Pete's Swamp, S.A.W. Bamboo Resort, and Goldwood Woods. In here, wheat surrounds the area, which a player can still cut as grass and count for the achievement. The Super Milk Barn is the biggest building of Super Animal Farm, containing a blocked door to the northern part of the barn and Duke's Storytelling on the east wing. The Super Milk Bar is the second largest building and may contain possible satisfactory drops. The third largest is the shack with a laboratory, located just east of the Barn and northeast of Milk Bar where Super Fried Chickens are possibly made. A long shack with drops can be also found just the west of Super Animal Barn, while all the other buildings are shacks containing other drops. There is also an area for chasing a Super Pig, which seemed to be an attraction before. Cover for this area is numerous, but interior-wise, corner-camping may be deadly for unsuspecting players. This area is one of the spots where players may drop in frequently, due to its large area and decent loot spawns. Rumors that the barn is a hidden base for Super Animal Super Resistance.

The big theatre located in not far from S.A.W. Welcome Center, this is the place where they host certain shows including Blue Jay Z, Lady Caw Caw and Larkson Trio performance. Rumors that there's a hidden room somewhere in this theatre.